When you are considering the functionality of your house, or features that you’d like to have, make sure you ask yourself: what’s the timeline? Not of the project. That will vary, of course. But how much longer do you plan to be in the house? Are you looking to live there forever? Is it your long-term house, or short-term?

Personally, when I bought my house, I kept saying “This is my First Home, not my Forever Home”, and that reminder has guided a lot of my spending/designing decisions.  In my case, it kept me from making decisions based on what I wanted, and made my decisions more about what the next homeowner might want. It helped me restrain my spending, knowing that I might not be in the house long enough to receive returns on all the investments.

That said, your enjoyment and benefit – even if it is short-term – does need to be considered when you’re establishing what to invest in, and/or how to design the house. Here are some questions you should ask yourself when you’re designing for the future:

Is it a permanent change?

Are you painting a wall, or are you removing a wall? As anyone knows, the two are very different, and will have very different impacts on the future of the house. While you might want to combine two rooms into one larger room, would the house be more valuable that way when you’re done?

I think temporary changes (painting, decor, etc) are always worth your enjoyment. If you want to paint the exterior a funky color because you’ve got ‘funky’ taste, then go for it. You (or the next homeowner) can always paint it back to a less-funky color at some point down the road. 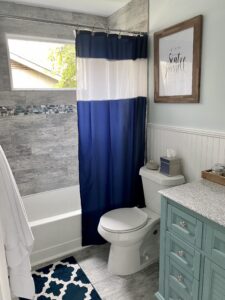 When I re-did my guest bathroom, I seriously considered just doing a walk-in shower, and removing the bathtub option. However, I knew that I would be doing that exact thing when I redid the master bathroom, and that would mean that there would be no bathtub in the house. While many adults I know would have zero problem with that, if the next homeowner had (or planned to have) kids and a family, that might not work for them, and they’d have to invest in re-doing a perfectly good bathroom. Thus, I decided to keep the bathtub in the design, as much as it was not what I wanted.

How long until the investment becomes profitable?

About two years after living at the house, with my first attempt at sod not being fully successful (I laid sod down three times before it became a lush, green carpet), I seriously considered putting artificial turf in my backyard. I knew they could be pricey, but thought with the reduced cost of irrigation, the clean look, and the functionality of not having to deal with as much mess (mud), it might be worth it.

Turns out, the cost of an artificial lawn would ‘pay for itself’ after about five years. Since I wasn’t planning to stay in the house for another five years, I chose not to invest.

That being said, knowing know what I didn’t know back then, I would have given this serious consideration if I had known better at my first attempt at laying sod. Not because the sod attempts were not worth it (jeez, they were a hassle – but I’m glad I did it), but because the cost savings from irrigation and pesticides and fertilizer would have been worth it, for a yard my size.

(Artificial lawns have a lot worth considering. More on that in another post to come…)

Will the next homeowner appreciate/value the change?

Is this a change that you want, or that the house genuinely needs? Sometimes, changing things around the house just because it’s not perfectly ‘your style’ isn’t reason enough to spend the money. This is especially true if you’re in the house for a short time, rather than an extended period. When I was looking at houses to buy, I kept coming across all of these homes that had been recently renovated. My realtor was – understandably – showing me move-in ready homes that needed absolutely no changes, so I could save money and time and hardship on renovating.

The problem was, I kept finding things I didn’t like. “This kitchen is great, but I don’t love the backsplash”. Or “I can’t believe they went with a modern fireplace in a bungalow”. So then I would think to myself that I could just change that one thing, to be more to my liking. The problem is, I would spend the money changing it (not to mention invest the time, effort, and sweat/tears), but wouldn’t realize any return on my investment. Changing a backsplash in a kitchen does not add to the value of the house.

What is it worth to you?

Note, I didn’t say “how much” is it worth to you, but “what”. If it is something that you will get great joy from, or truly benefit from, it might be worth the investment, whether or not you’ll see rewards from that investment. 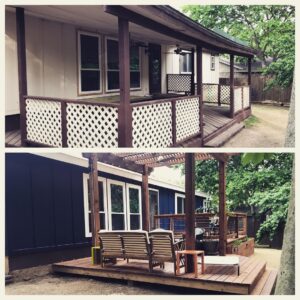 Re-doing my deck is an example of this in my house. I had to re-do the deck anyway, that went without question, because the roof over the existing deck was quite literally collapsing, month after month. But did I need to build a two-tier deck with a pergola? Probably not. But I knew that I would be living in the house for an additional three years or so, and I truly wanted to be able to enjoy my backyard, and wanted to design and build it in a way that was functional (for both me and new homeowners), even if it would cost a bit more to do it “my” way than a basic, single-tiered version. It was worth my enjoyment, and my desire to be able to ‘live’ in the backyard whenever I wanted to.